As the Civil War entered its fourth year in 1864, little progress had been made to quell the rebelling states. President Abraham Lincoln received numerous requests from his field commanders over the course of the war asking approval to target civilian infrastructure during military campaigns. Lincoln originally opposed civilian involvement, hoping to minimize the damage inflicted on the South. However, climbing casualties and political turbulence on Capitol Hill prompted Lincoln to endorse this destructive total war policy with the goals of destroying Confederate supply lines, breaking the South’s will to fight, and bringing a decisive end to a bloody war.

Lincoln’s approval of total war campaigns almost immediately changed the tide of the Civil War in the Union’s favor. General Philip Sheridan’s Valley Campaign of 1864 destroyed much of the Shenandoah’s agricultural and transportation systems and effectively brought the “Breadbasket of the Confederacy” under Federal control. Meanwhile in Georgia, General William Tecumseh Sherman conducted his March to the Sea—a 285-mile march from Atlanta to Savannah during which Union troops pillaged civilian warehouses and homesteads, destroyed railroads and telegraphs, and burned untold acres of farmland.

Following the capture of Savannah on December 21, 1864, Sherman was ordered by General Ulysses S. Grant to march north and assist Union forces outside of Petersburg. As Federal forces mobilized in early 1865, Confederate President Jefferson Davis instructed General Joseph E. Johnston, commander of the Army of the Carolinas, to intercept Sherman on his march and assist General Robert E. Lee’s Army of Northern Virginia in the defense of Richmond.

Besides a few skirmishes, Sherman’s 60,000-man army marched from Georgia into North Carolina unopposed. No major battle was fought between Johnston and Sherman's armies until the Battle of Bentonville, March 19 – 21, 1865. Despite initial Confederate success, Johnston’s army was forced to withdraw west to Smithfield due to lack of supplies. Sherman continued his march north to Goldsboro, where he joined Major General John Schofield’s Army of Ohio. The combined Union force swelled to nearly 90,000.

On March 25, Sherman met with Grant, Lincoln and Admiral David Porter in City Point, Virginia, to discuss how to end the war. Petersburg and Richmond were on the brink of collapse, and the addition of Sherman’s force to Grant’s would almost certainly assure Union capture. The council also discussed terms of reunification, during which Lincoln stress “malice towards none, with charity for all.”

Shortly after Sherman’s return to Goldsboro, the Confederate line at Petersburg broke apart. Grant’s forces managed to break through, causing a full-scale retreat of Lee’s army. The Confederate capitol of Richmond fell on April 3, 1865, and Lee eventually surrendered to Grant at Appomattox Court House on April 9.

Outnumbered nearly two-to-one, Johnston asked President Davis permission to open peace negotiations with Sherman. Davis wanted to open a renewed Confederate offensive in lieu of Lee’s surrender, but after much convincing from his Cabinet, he reluctantly approved of talks. Major J. Rawlins Lowndes and Private Munson M. Buford personally delivered Johnston’s request to Sherman on April 14. The two generals agreed to meet halfway between their respective camps along the Raleigh-Hillsborough Road on April 17.

Sherman received an urgent telegram from Washington D.C. the morning of the meeting informing him of President Lincoln’s assassination two days earlier. Sherman decided to keep the information confidential until after his negotiations with Johnston, anticipating an overwhelmingly negative response from his army.

Sherman arrived at Durham Station with Kilpatrick and members of the 9th and 13th Pennsylvania, 2nd Kentucky, and 8th Indiana infantries. They marched westward until they encountered Johnson, who was joined by his cavalry commander, General Wade Hampton, and members of the 5th South Carolina cavalry. Both generals greeted each other under a white flag of truce. Johnston suggested the two conduct their negotiations at a small homestead a short ways down the road. Sherman agreed and the two commanders made their way towards the farm of James and Nancy Bennitt (Bennett as it is spelled today).

The Bennitts were a modest, middle-class Yeoman (non-slave-owning) family. They raised livestock and grew seasonal crops on the 189 acres of land they owned. The Bennitts, like most of central North Carolina, had originally voted against secession and were reluctant participants in the war. Their oldest son, Lorenzo, was conscripted into the Confederate army in 1862 and served in Company G of the 27th North Carolina Infantry before succumbing to typhoid fever that October. Their youngest son, Alphonso, did not serve in the Confederate army but also died that same year of an unspecified cause. Eliza Ann, the couple’s daughter, lost her husband, Robert Duke, to illness in August 1864. Over the course of the conflict, the Bennitts lost two sons and a son-in-law, and it’s nearly impossible to comprehend their emotions when two of the war’s greatest generals arrived at their doorstep.

The conference started around midday. After exchanging pleasantries, Sherman informed Johnston of Lincoln’s death. The Confederate commander described the tragedy as “the greatest possible calamity to the South.” Despite the assassination, the generals continued their negotiations in the hopes of attaining a lasting peace. Sherman offered Johnston the same terms of surrender Lee accepted at Appomattox, a purely military capitulation. Johnston refused the terms claiming they were too harsh, and unlike Lee, his army was not surrounded. In exchange for his army’s surrender, Johnston wanted protection of political rights: pardons, general amnesty, and restoration of full citizenship. Sherman agreed to revise the terms the following day, eager to end the war on good terms with the South and suppress the possibility of a prolonged guerilla war.

Sherman, Johnston, and Confederate Secretary of War John C. Breckinridge (acting as a Major General) reconvened at Bennitt’s farm on April 18. The agreement, which pended approval from respective government entities, called for an immediate suppression of all hostilities, the deposition of Confederate arms at state arsenals, disbanding of armies, reestablishment of federal courts, recognition of southern state governments, and general amnesty for all but the highest-ranking Confederate civilian leaders. Sherman was convinced, after signing the terms of surrender, that he had “secured peace from the Potomac to the Rio Grande.”

President Davis accepted the terms of surrender, but the Federal government flatly rejected them. The assassination of Abraham Lincoln had drastically changed the climate on Capitol Hill and many politicians felt that the terms were too lenient. Members of Congress and President Andrew Johnson’s Cabinet questioned Sherman’s patriotism, accused him of being a traitor, and called for his immediate resignation. Secretary of War Edwin M. Stanton was the most critical of Sherman, claiming he had deliberately acted against the late Lincoln’s stipulations of surrender and accepted a bribe to allow Jefferson Davis and his Cabinet to escape capture (though there was no proof of these claims). The New York Times published the terms and Stanton’s scathing review as the libelous assaults on Sherman continued in the days following the agreement.

General Ulysses S. Grant was ordered to take charge of the Federal armies in North Carolina and renegotiate terms of surrender, displacing Sherman in the process. Grant arrived in Raleigh on April 24, but instead of taking over the army, he advised Sherman to offer Johnston the same terms of surrender signed at Appomattox. Sherman requested Johnston to return immediately for negotiations or face resumption of hostilities.

When Jefferson Davis learned of the Federal government’s rejection, he ordered Johnston to disband his infantry and escape with mounted soldiers to resume the fight. Johnston, seeing the reality of the situation, disobeyed Davis’s orders and agreed to meet Sherman one final time at Bennitt’s farm on April 26.

Sherman presented Johnston with terms of surrender nearly identical to those signed at Appomattox. They omitted the political and civil rights Johnston had so advocated for in previous discussions. The Confederate General was still hesitant to sign, since there was no assurance of his soldiers’ welfare once the armies disbanded. With negotiations stalled, Sherman asked for Major General Schofield’s input on the situation. Schofield suggested that two documents be drafted: one specifying terms of surrender and the other outlining the logistics of supplying and transporting Johnston’s soldiers home. Johnston agreed and signed both documents. Sherman signed the surrender papers while Schofield signed the logistical documents and was placed in charge of their implementation.

Genera Joseph E. Johnston surrendered the Confederate Armies of Florida, Georgia, and the Carolinas. In all, 89,270 soldiers laid down their arms, making it the largest surrender of the Civil War. Johnston’s surrender effectively ended major Confederate resistance in the South. Smaller Confederate armies continued to surrender over the following weeks and months.

Sherman and Johnston struck up a mutual respect for one another during their negotiations and developed a lasting friendship following the Civil War. Sherman died on February 14, 1891, and his funeral was held on February 19. Johnston was in attendance as a pallbearer. The day of the funeral was colder than usual, and when Johnston was asked if he wanted to put on a hat, he replied, "If I were in [Sherman's] place, and he were standing in mine, he would not put on his hat." Johnston died nearly one month of pneumonia on March 21, 1891.

Many Confederate veterans relocated their families to Raleigh and Durham and rejuvenated their farms with bright leaf tobacco—a productive cash crop that required considerably less labor to maintain and harvest compared to cotton. The Bennitt family was not so fortunate. Following the war and the losses of their sons, the Bennitts were forced to sell much of their land and become sharecroppers. They never financially recovered from the hardships of war.

Without an active farm, Bennett Place fell into disrepair. Preservation efforts began in the 1890s when Brodie Duke saved the site from demolition. The property was sold to philanthropist Samuel T. Morgan in 1919 to create a memorial park and monument. However, Morgan died of natural causes in 1920 before the park could be established and the original Bennett homestead burned down in a mysterious fire nearly a year later. In 1923, the Unity Monument was erected and dedicated to the reunification of the Union. The unveiling ceremony was carried out despite protests from the Daughters of the Confederacy. Farm restoration began in 1959. Period buildings from the neighboring Proctor farm were dismantled and reconstructed on the Bennett property. Bennett Place was commissioned as a state historic site in 1961.

The historic site itself is rather small (I hesitate to say lackluster) and shouldn’t take more than 20-30 minutes to explore. The Visitor Center has a wonderful presentation on the prelude, negotiations, and after effects of peace. There are also some neat displays on the Bennitt family and the region’s economy before and after the Civil War. The outdoor exhibits are few but interesting to look at. The reconstructed Bennett House, Smokehouse, and Kitchenhouse are arranged along an original stretch of the Raleigh-Hillsborough Road, much like they were in 1865. Bennett Place shouldn’t be considered a site to go out of the way to see, but it’s definitely a must-visit if you ever find yourself in the Durham area.

Bennett Place was the site of arguably the most influential and momentous occasion of peace during the Civil War. Generals Sherman and Johnston both realized the futility in continuing hostilities and went to great lengths to achieve a lasting armistice—Johnston disobeying direct orders from high command and Sherman laying his reputation on the line. The illustrious acts of these two generals embraced Lincoln's words of "malice towards none...charity for all," and set the stage for an easier transition to reunification and peace. 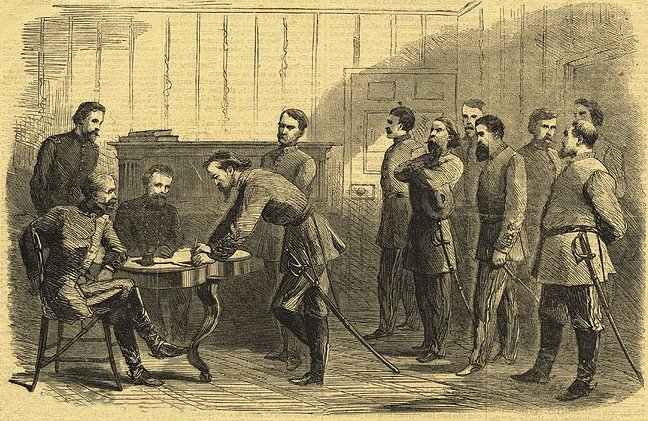 Visit the Bennett Place Web Page for more info on the site and Terms of Surrender!

Check out the following scholarly resources regarding the events leading up to the surrender at Bennett Place:

For more on the controversy surrounding the Unity Monument, visit this University of North Carolina web page!