Glass from the Past

I've always had a knack for exploration, even when I was a little kid. About seven years ago, I was walking along a creek bed in the woods that ran near my house. Suddenly, I spotted something sticking out of the ground. Being my curious self, I went to investigate and it turned out to be an old bottle. Excited that I found something old, I ran back to my house to show my parents. Boy, were they happy that I brought trash home! After a bit of research, the bottle turned out to be a 1970s Pepsi bottle...so yeah, essentially garbage. However, I had a feeling that there was something older hidden in the woods. So I went back and discovered an older bottle spill (turn-of-the-century to the 1950s) further up the creek. This is where it all began for me--the thrill of relic hunting, history, and research. They say once you're bitten by the "bottle bug," you're hooked. For me, that's an understatement.

I have gone back and forth to this site periodically over the years and have pulled over 400 bottles out. For the first few years, all of my finds were on the surface and not too old. The majority of my finds were ACL sodas, Mason jars, liquor bottles, and the occasional milk bottle. As my digging methods matured, I realized there was a treasure trove of bottles under the dirt. This is where I got into the old stuff...some dating back to the late 1800s! When I went to college, I stopped digging because I was out of town a lot and just didn't have the time when I was home. Last weekend was the first time in over three years that I've had a chance to dig for some bottles, and it surely didn't disappoint.

The area I'm digging in is pretty rough. The dirt is a heavy, dense clay which places a lot of stress on the fragile glass artifacts below. This makes finding whole bottles a struggle. For the first half of my dig, I didn't find much. Just a few pieces of pottery and china, a Carter's inkwell, and many shards of 19th century glass. Undeterred from the small take, I continued to dig and finally got into a nice pocket of bottles...most of them broken but some were in nice shape. After about two hours of digging, I found two To-Ko Company bottles, a Fletcher's Castoria, and a few broken brewery bottles with their embossing still in-tact.

The one thing as fun as digging the bottles is researching them. Below are my finds and the information I could find on their respective companies:

The To-Ko Company (Hagerstown, MD) -- I can't really find much on this company, other than it was founded in 1908 and goes off the map by 1914. All I have to go off of are some financial/business records and a newspaper article from 1911. Other than that, there's not much else. These two bottles are of different variants. The one on the left is aqua in color and says 'REGISTERED / CONTENTS 8 FLUID OZ' below the logo. The one on the right is clear and only says 'REGISTERED.' Below is an excerpt from that 1911 article, courtesy of the Western Maryland Historical Library (www.whilbr.org):

'This [The To-Ko Company] is an incorporated Company with a Capital of $20,000. It has been established for about three years, and To-Ko has been widely introduced throughout this section of the country and has become known as "The Drink that Satisfies." It is for sale at all fountains and in bottles at the usual price of five cents. This drink is fully guaranteed by the manufacturers to be absolutely pure, and the business of the Company is destined to greatly expand as the years grow by. At the present writing the most extensive business is done throughout Virginia, West Virginia, Pennsylvania, and Maryland. All proprietors of bottling plants should make a special effort to secure the special license for the exclusive bottling of To-Ko in their territory. The officers of this Company are, H. R. Rudy, Pres.; H. L. Meredith, Treas., and T. J. Fuqua, Sec. and Gen. Manager. The plant is thoroughly sanitary, and the great business transacted now requires the employment of a number of people.'

George Brehm and Son (Baltimore County, MD) -- George Brehm started brewing his beer when he bought the Neisendorfer Brewery in 1866, located at the corner of modern-day Brehms and Bowleys Lanes in Belair-Edison, Baltimore, MD. In 1901, his son, Henry, entered the enterprise and his company was renamed as such. There are two breweries under the name 'George Brehm and Son.' The first was in operation from 1901-1911 and the other from 1911-1920. Due to the rough seams in the molding and air bubbles/stretch marks visible in the glass, this bottle can be dated to the earlier brewery.

Now, you'd think that once Prohibition took effect in 1920, the brewery would go out of business. Not so. Brehm's company turned to selling soda during this time. Additionally, there are accounts that his beer was bootlegged through underground passageways and distributed at a nearby bowling alley.

Robert Portner Brewing Co. (Alexandria, VA) -- Robert Portner immigrated from Westphalia, Prussia to Alexandria, Virginia in 1853 and started a grocery with Frederick Recker in 1861. During the Civil War, Union troops were quartered in Alexandria and the demand for alcohol went up. Seizing this opportunity, Portner started his own brewery. Portner brewed lager--a traditional brew of Germany and Austria--which was gaining popularity in the states. In order to brew lager, the yeast had to ferment at cooler temperatures, which could be a struggle during the summer months. To combat this issue, Portner and his brew master Carl Wolters developed an artificial cooling device using ammonia in 1880. Their designs contributed to the development of modern air-conditioning technology. The Robert Portner Brewing Company quickly became one of the leading distributors on the East Coast. However, in the early 1900s with the growing pressures of prohibition and the death of Portner, the company's prosperity began to decline. And with Prohibition taking effect in 1920, the company never fully recovered. It was dissolved in 1936. This particular bottle is a blown-in mold and dates between 1900-1920. There is a lot of information on Robert Portner and his brewery. Find out more about the history here! More about the bottles here!

Christian Moerlein Brewing Co. (Cincinnati, OH) -- Christian Moerlein was a Bavarian immigrant who moved to Cincinnati in 1841 and started his own brewery in 1853. Moerlein quickly became the most prominent brewer in the city and, at his peak, he was the 13th largest brewer in America and made exports to Europe and South America! Moerlein's company thrived for a few years after his death in 1897, but didn't make it past the 1930s (thanks, Prohibition). However, a couple companies in Cincinnati still carry his name today. This bottle in particular dates to the late 'teens or early 20s. Here's more info on Moerlein's Brewery.

Edward H. Everett Company (Newark, OH) -- The Edward H. Everett Company was founded in 1885 and lasted until 1904. The company went by the 'EHE Co.' mark from 1900-1904. This shard is particularly interesting since it has a smooth, curved base...probably part of a Hutchinson bottle. This type of bottle was named after Charles G. Hutchinson, who invented a wired rubber stopper in 1879 as an alternative for corks. Production of this bottle style was discontinued by 1912. It's neat how much information can come from a small shard of glass. For more information on the Everett Company, click here.

Thanks for reading everyone! More stories on this topic are coming soon! 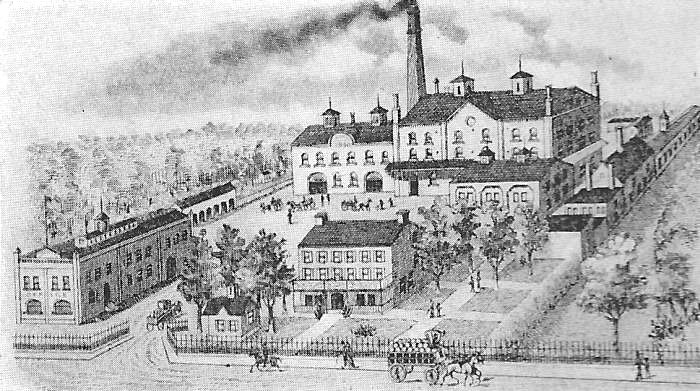 Diggin' In Virginia XLV: The Video